As a Mathemagician (I didn't pick the name) I have been lucky enough to work with Prof. Marcus du Sautoy on a number of occasions. One of my favourite projects that I have worked on was when he asked me to do some illustrations for his most recent book, The Number Mysteries. Specifically, in Chapter 2, The Story of Illusive Shape, he wanted some pictures of fractals. So for those of you who have read the book you'll see some familiar figures below and for those of you who haven't then hopefully these will pique your interest and you will go and find out more.

Figure 1. Illustrations of how to measure the dimension of a fractal by covering it in boxes of different lengths. 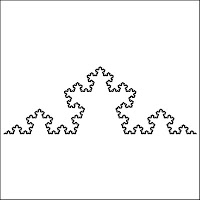 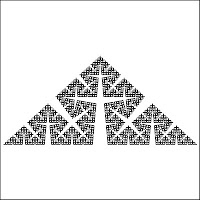 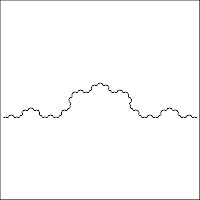 Figure 2. The Koch snowflake is a very famous fractal. Normally, it is constructed using an equilateral triangle. Here, I alter the angle to make it isosceles. What do you think that might do to the dimension?

Figure 3. The Koch snowflake is constructed by replacing the middle third of a triangle with a triangle a third of the size. Normally, all the triangles are taken to point outwards. However, above I randomise this process. 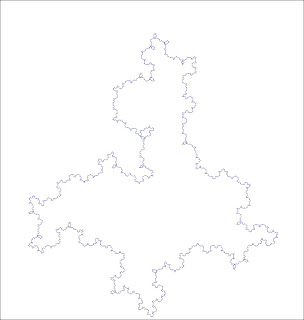 Figure 4. If you put three of the randomised Koch snowflakes together you get something that looks like a medieval map of Britain


If in the future I run out of things to say I may put up the codes so that you can also learn how to create such structures.
Posted by Thomas Woolley at 08:00 No comments:

Email ThisBlogThis!Share to TwitterShare to FacebookShare to Pinterest
Labels: Number_mysteries

Now, I'm sure I could spend a long time gushing over the various ways the people have tried to encapsulate the beauty of mathematical ideas through inspiring prose. Indeed, there are such things called "Piems", which are used to remind the reciter as to the digits of Pi. Each word is the length of the corresponding number in the decimal expansion. Here is a very impressive example called "Poe, E: Near a Raven" (3.1415). Not only does it allow you to calculate Pi to its 740th decimal place but it has used Edgar Allan Poe's poem "The Raven" as the subject matter.

I could even mention that more and more artists, muscians and writers are turning to mathematics in order find inspiration to create aesthetic pieces.

However, I'm not going to do any of that as this is the blog of the laughing mathematician. I'm here to take a lighter look at the mathematical world and that is exactly what I'm going to do. Here you will find mathematical ditties, limericks and even a poem that solves a logic puzzle! What more could you want?

So without further ado, here are a couple of my favourite limericks.

Email ThisBlogThis!Share to TwitterShare to FacebookShare to Pinterest
Labels: Poetry

One of my favourite pieces of mathematics that I have ever done has been about zombies. Now, as a mathematical biologist, I often wonder whether zombies come under my remit. Are the biological? They aren't really alive. But anyway, sit back and let me recount the story.

In 2009 P. Munz, I. Hudea, J. Imad and R.J. Smith? wrote a paper called "When zombies attack!: Mathematical modeeling of an outbreak of zombie infection". His conclusions were bleak as it seems that if the dead should rise, there will be no room for the living. As you might expect this was a huge hit with the science/media interface.

Fast forward to the end of 2010 and Robert Smith? (yes, the question mark is actually part of his name) decided that the original paper was such a success that he'd like to generate a whole book about zombie mathematics. He sent out an email call to his mathematical colleagues, asking if any of them were interested in writing a chapter for a layman's biological mathematics book, using zombies as the hook to interest the general reader. Well, what could I do? In my life I care about three things; mathematics, teaching people about mathematics and zombies - in that order. So I jumped at the chance.

The book is scheduled to be completed April 2012, but here are some of the pictures contained in my article. I created the man with the gun but I have to thank Martin Berube for the zombies.

Email ThisBlogThis!Share to TwitterShare to FacebookShare to Pinterest
Labels: Zombies

Quite a simple one today and, although I like it, it irritates me as I know that the graph is not well defined.

Ah the trials and tribulations of a mathematician. 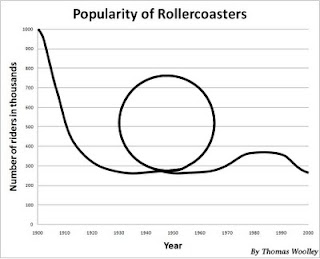 As ever, if you have any maths jokes that you think would benefit from my illustrative skills then simply tweet them to me @ThomasEWoolley
Posted by Thomas Woolley at 08:00 2 comments:

Email ThisBlogThis!Share to TwitterShare to FacebookShare to Pinterest
Labels: Laugh

Maths laugh 2. Do you suffer from Triskaidekaphobia?

OK, so it is more of a pun than a mathematical joke but hey ho I like it anyway. 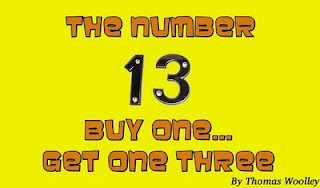 Thanks to @reflectivemaths and @SallyRobin for suggesting maths jokes that I can illustrate. Keep'em coming.
Posted by Thomas Woolley at 08:00 No comments: