Maths in the City.

To break up the math laughs I've decided to post about another project I've been working on recently. Maths in the City is a project funded by the EPSRC and run by the Department of Continuing Education at the University of Oxford. Essentially, it is the brain child of Marcus du Sautoy who wanted to show everyone that maths is not simply sums in a book, it is a crucial part of the world we live in.
Currently, there are ideas based on the satellite dishes that we use to watch TV. Numerous sites based on how buildings use unusual shapes to their advantage. To find out more, or if you think you have an idea for a site yourself, go to


NOTE: The deadline for the competition is noon, 3 May 2011.
Below is a short piece I filmed in New College, Oxford. In the garden is a mound with quite unusual properties. 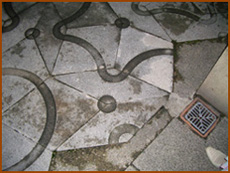 Here is an idea for free. In Wadham College, Oxford, there are Penrose Tilings right outside the bar. Nobody, as yet, has done a piece on them. If you think you could produce an interesting activity using the ideas behind tiling then post a Site and enter the competition.
The mascot of this project is called Dave (or Davina). If you enter a Site to the competition try and smuggle a Dave into the scene. Below are a couple that I produced when I took Dave on a trip to London. To hear more about the project, and why the mascot is called Dave, have a listen to this recent Math/Maths podcast, for an interview with Rachel Thomas (one of the organisers). 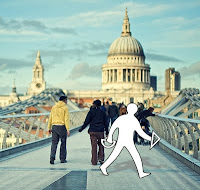 Email ThisBlogThis!Share to TwitterShare to FacebookShare to Pinterest
Labels: Maths_in_the_city

A while ago I created some fun maths pictures for a competition. Now, I could either leave them to waste away on my hard drive or try and raise a smile by publishing them here.
Note that, although none of the jokes are original, the illustrations are all mine.
Maths laugh 1: Graphing the Escher staircase. 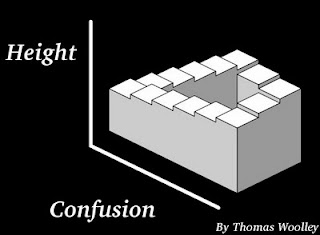 Over the next few days I will post the rest. If you have any other suggestions tweet them to me @ThomasEWoolley.
Posted by Thomas Woolley at 10:01 1 comment: